About “The Ochre Chair”

There was a beautiful little home design shop in Rochester called Bellissima that Tina and I would often shop in while walking the town. Right at the corner of Third and Main, it was next to the Coffee Beanery, which was more or less the best coffee available in town before Starbucks moved in — and then out again — and their proximity made a coffee and a stroll through Bellissima a pretty routine outing for us. We bought a few lamps there, which only recently made their way into someone else’s hands via a tag sale (as Martha Stewart would call it), and assorted other knickknacks of life. But there was one opportunity we missed.

As it turns out, the narrative of the poem is very realistic. We loved a painting in the store called “The Ochre Chair,” an interior with a prominent chair and its interesting ochre color. It was priced in a range that was affordable yet not something that you would pick up on a whim. We waited and waited to see how fate would resolve the tension for us. Would it be purchased by someone else? Would we find an extra balance in our account at the end of one month or another? Or would we decide that, in the end, we didn’t like it enough to acquire it?

None of these more obvious omens materialized. Finally, we wore ourselves down when we decided precisely where it should go in our house and we walked into town to buy it. Inside the store, the painting seemed suddenly more beautiful because it was finally going to be ours — and by some miracle they were having a sale. As anticipation is more satisfying than realization, we chose to intensify the retail pleasure by elongating it, walking through the store to see what else might interest us and even going to their small upstairs loft where linens and bath items were extravagantly displayed.

There is a moment in the Seinfeld episode “The Statue” in which Elaine is arguing with the writer Rava in an elevator about whether Rava’s husband stole a statue while he was cleaning Jerry’s apartment:

(Enraged, she poses the question to everyone in the elevator.)

I’m not sure where I land on the question of the measurements of coincidences, but I have to say when Tina and I came down the stairs of Bellissima, on the corner of Third and Main, in this little store and town we loved, filled with joy about a painting we had thought about for a long time, we were more than surprised to see that the wall on which it had hung was empty. Outside, a woman was placing a large parcel into her trunk. We turned to the clerk in despair. Fate had decided.

Since Bellissima is no longer in business, Dave had to go out in search of another photo. Here’s his caption, which I found particularly funny knowing that I’m not the one who chose that color:

To start with, yes, I had to look up ochre. Who calls a color ochre? Driving home one night I saw the furniture store on US-31 and made a mental note to drive back by after dark when the lights would play up the inside. So 11pm, after a Burger King run, I drove in and shot this, and a few others. But the words on the door “Sunday – Closed to be with family” in this one resonated with the group. There’s probably some ochre in this shot somewhere. To find it, start with a dictionary. 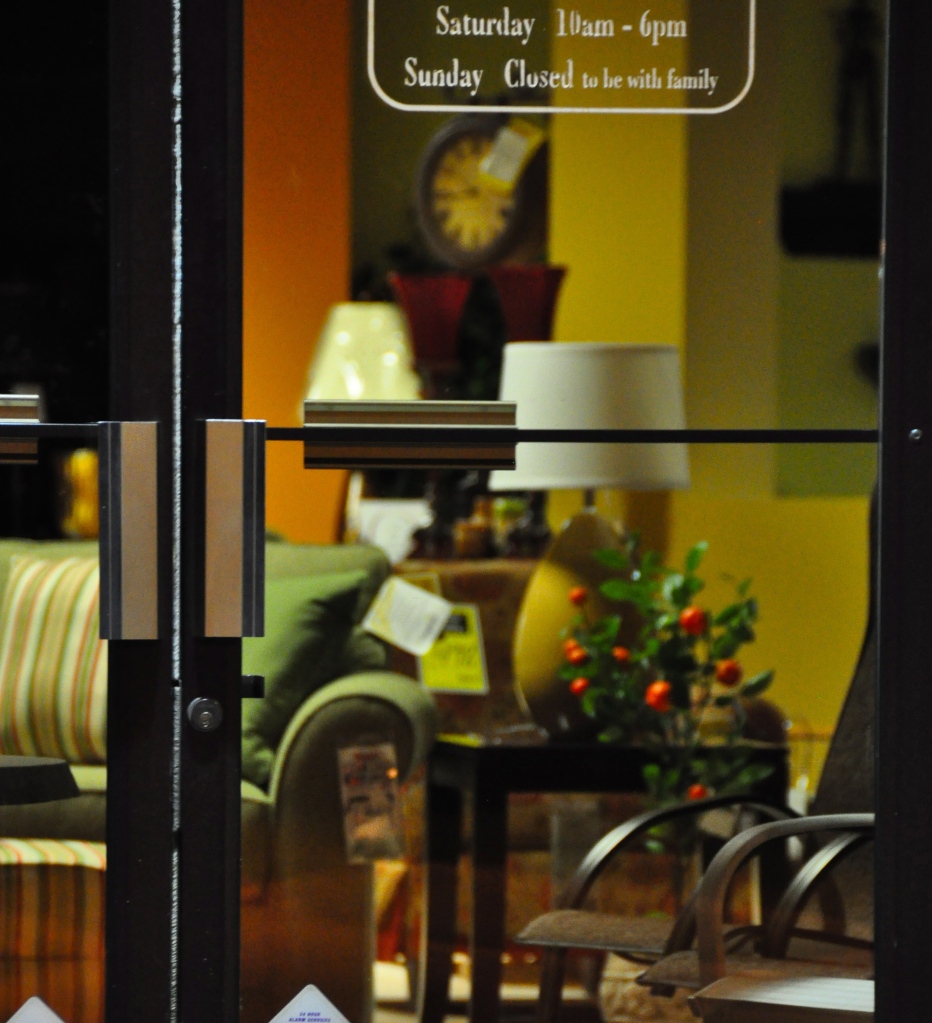