About “The Art of Palm Crossing”

Tina and I started dating in 1991 (on July 20th, to be overly specific). At the time, her maternal grandfather was battling stomach cancer. His suffering was evident the first time I met him. That October, on Sweetest Day, we went to the movies; I think it was “The Fisher King,” a movie I remember literally nothing about. When we came home, we learned — in those days before cell phones — that her grandfather had moved on while we were out. As she melted against the wall of the laundry room in anguish, a chill ran through me. She should have been at home that night.

Her grandparents had come to Detroit from Sicily in the early 1950s and were, as is the case is many Italian families, the sturdy foundation upon which their entire family was stacked. A few years earlier, her Uncle had died far too young from cancer as well. These two events drew an indelible line across their family map and the disease has colored every doctor’s visit and annual checkup since then.

I wrote this poem in the months after his passing. One of the tangible things he had left his family was the tradition of making palm crosses. Tina and I had to figure out how to make them by gently unraveling one of his and then refolding it.

Dave went the extra mile and made his own for the picture:

I’ve seen these before and never thought I had the dexterity for it. Delicate manual projects usually crumble under my frustration. Out of curiosity I checked Google for videos on making palm crosses. There are many, so I watched and I thought, if I screw this up, maybe Andy will have some better ideas. So being a good Catholic still in possession of last Easter’s palms, I gave it a try. (Note: this is easier if they aren’t so dry.) In shock at my successful failure to destroy a dry palm, I set up the shot on a satin pillow case cover, freshly unfolded from the linen closet. With a little help from Andy on post processing, we decided to use it. 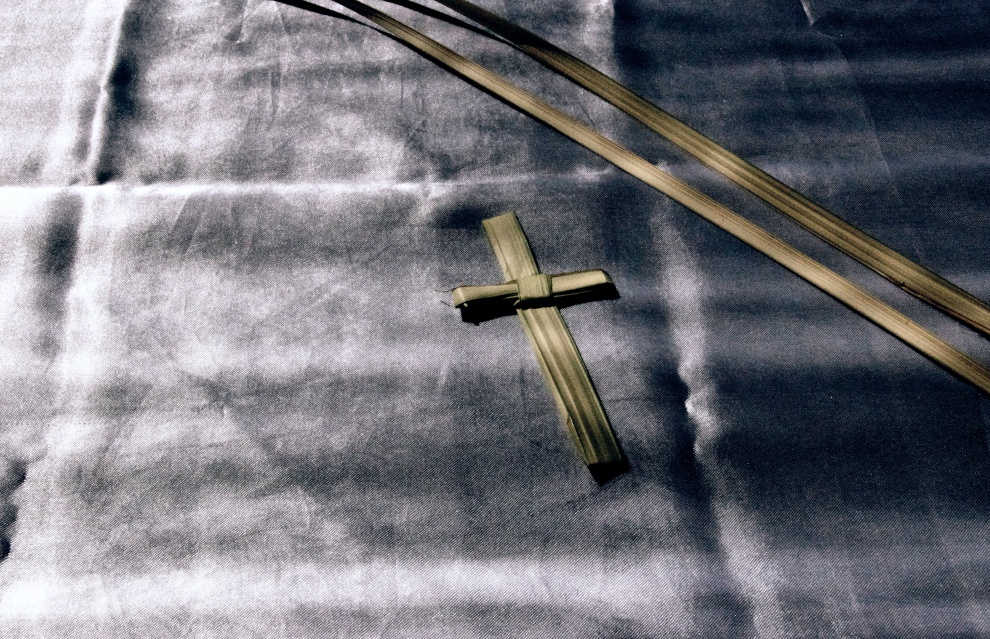